Ryan and Brandon come for a first visit

Being the third child but first girl in the family must mean a dramatic entrance is in order! As many of you knew Wednesday, November 8 was “B” day for our family. We went in early in the morning to get started. Ryan, #1 son, had been induced for medical reasons 4 days past his due date. Brandon, #2 son, had been induced when he was a week past his due date. This was going to be a piece of cake. The only problem was we still didn’t have a name picked out!

Some time after 6 pm and a period of irregular baby heart beats from the monitor it was discovered that we had a prolapsed umbillical cord and a very scary emergency c-section was needed. I was rushed to surgery and by 6:30 Ian had a new baby in his arms. She was not breathing when they took her and has some bruising from the resuscitation. The pediatricians all say everything looks fine with her. Mom is recovering a little more slowly than I had originally anticipated from a “normal” delivery.

Yes, we did drive the hospital crazy by not actually giving her a name until late Friday afternoon. 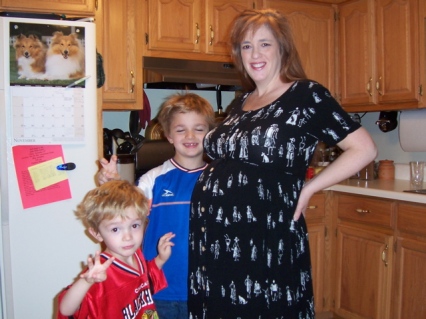 THURSDAY, Oct. 19 (HealthDay News) — Rolling the windows down while driving doesn’t eliminate the unhealthy effects of secondhand smoke for kids and other sensitive passengers, a new U.S. study finds.

“The levels were above the threshold for what’s considered unhealthy for sensitive groups — people like children and the elderly — as determined by the Environmental Protection Agency (EPA),” study author Vaughan Rees, a research associate at the Harvard School of Public Health, said in a prepared statement.

For this study, researchers attached a pollution monitor to a child safety seat in a car and had a smoker-volunteer drive an hourlong route. This was repeated 45 times. On some drives, all the car windows were down. On other journeys, the driver’s side window was opened only about two inches, and the other windows were closed.

The pollution monitor measured levels of “PM 2.5″— particulate matter or particle pollution in the air that was 2.5 micrometers in diameter or smaller. The smaller the particles, the easier it is for them to get into the lungs.

According to the EPA’s Air Quality Index, 24 hours of exposure to PM 2.5 levels greater than 40 micrograms per cubic meter is a health risk for sensitive people, including children, the elderly, and those with certain medical conditions. Levels of PM 2.5 greater than 250 micrograms are a health hazard for all people.

When all the car windows were wide open, the average level of PM 2.5 in the car was 51 micrograms, compared to 272 micrograms when only the driver’s window was opened slightly, the study said.

“At 40 miles an hour, on an open road, there’s quite a lot of air movement inside the vehicle, but that wasn’t sufficient to completely remove the secondhand smoke. In other words, the smoke really hangs around,” Rees said.

The study is published in the November issue of the American Journal of Preventive Medicine.

Some U.S. states have banned smoking in private vehicles to protect children from secondhand smoke.

The American Lung Association has more about secondhand smoke and your family.

Tell me when this blog is updated